Eating Healthy Food As described in Ayurveda will be beneficial, learn about it 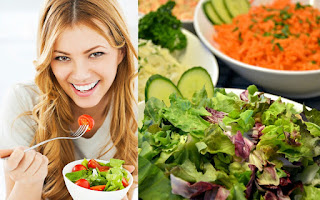 It is necessary to have sweet salty sour pungent bitter and astringent in food defects and diseases in the body growing due to dietary disturbances Our health depends on eating Nutritious catering is essential So that energy remains in the body Prevention from diseases.
Food is considered to be a major element of health in Ayurveda Good Ayurvedic diet is based on the nature of a person s body which nourishes him Diet also keeps you away from diseases Women should take special care of their food according to age so that energy can remain in the body and prevent diseases Know what precautions should be taken from an Ayurveda expert regarding catering.
Ayurvedic Diet: In Ayurveda, it is believed that any disease is caused by the imbalance of the elements found in the body When there is an imbalance in any of the three elements of Ayurveda Vayu pitta and Kapha, it is called dosha For example if a person has an excess of Vata he will feel dizzy if there is an excess of bile then there will be swelling and he becomes more mucus due to imbalance of phlegm There are three categories of diet in Ayurveda
Satvik Diet It is the purest of all diets Nourishes the body calms the brain increases immunity It consists of whole grains fresh fruits vegetables cow’s milk ghee legumes nuts sprouted grains honey and herbal tea.
Rajasic Diet This food is protein-based and spicy Excessive manual labor can use this food.
Tamasic Diet: This includes refined food. It is deep-fried and spicy They also have high salt content They increase laziness.
The balance of nutrients remains
Six juices should be included in the meal Sweet salty-sour pungent bitter and astringent People of Vata nature should eat sweet sour and salty people of Kapha nature should be bitter spicy astringent and people of Pitta nature should eat sweet spicy and astringent This does not increase the imbalance of nutrients in the body.
Ayurvedic Diet Plan
Organic food is full of energy Make the vegetables by frying them lightly with less oil and fewer spices Take seasonal fruits milk buttermilk yogurt cottage cheese pulses soybeans and sprouted grains. Instead of sugar eat bran flour and porridge instead of honey jaggery fine flour The food should neither be overcooked nor undercooked.
Beware: this healthy food may not be made anywhere but the reason for your death
Many food items contain a lot of poison Even a small intake of these can be life-threatening.
Often we eat anything in a hurry due to being busy, but this habit of ours can overwhelm us many such things of food contain a lot of poison Even a small intake of these can be life-threatening Today we will tell you about some such poisonous things of food.
Apple Seed Eat apple several times a day, not every day but the thing that is important to keep in mind is that do not forget to throw away its seeds If you drink juice from an outside note that they do not grind the seeds anywhere Apple seeds contain cyanide and are extremely dangerous for you.
Gourd Gourd juice, gourd in salad healthy stop If the gourd is a raw food first it
Do the test If it tastes bitter then throw it away immediately It has become poisonous because it contains a bacterium named Cooker Beetle If you eat it then it will become life May also know
Potato If you eat raw potato, you will die, so it is not being eaten You have to pay attention to how the potato color is If potatoes start to turn green then poisonous elements have come in them It is caused by glycoalkaloids It is dangerous for your body If the potatoes have turned green do not eat them.
Cashew Raw cashew nut contains urushiol which is similar to poison for the human body The cashew nuts that you buy from the market, they reach you after going through many cleaning processes. You should choose only cashews on which Ready to consume is written
Almonds Every day you eat almonds sometimes in milk or sometimes in sweets or by strangling Keep eating them there is no risk from them Dangerous are almonds that are raw and bitter Their bitterness is a sign of their poisoning Their bitterness is caused by cyanide Do not eat them.
Nutmeg or nutmeg contains myristicin Eating a little portion of this spice may affect your ability to understand What you feel will not be a reality Eating as little as 5 grams can make your muscles squirm.
Rajma: Where Rajma rice is one of the favorite dish of the whole country the raw food of Rajma can prove to be fatal for you Raw beans contain cyanide Hydrogen cyanide is formed when raw beans are ground raw, which can be dangerous for your health.